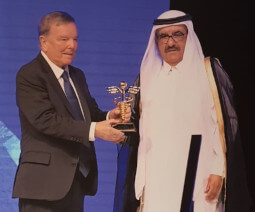 Professor Graham Hughes, Head of the London Lupus Centre at London Bridge Hospital, has been selected to receive the Hamdan Award for Medical Research Excellence in the field of Rheumatology.

The Award, one of the most prestigious in international medicine, is to be presented by Sheikh Hamdan Al Maktoum in Dubai, United Arab Emirates on Wednesday 12th December 2018.

Professor Hughes was honoured for his description in 1983 of the antiphospholipid syndrome, now known internationally as Hughes Syndrome. This thrombotic disorder (sticky blood) has had a major impact on a number of specialties, including cardiology, neurology and surgery. In obstetrics it is now recognised as the commonest, treatable cause of recurrent miscarriage.

Professor Graham Hughes may possibly be the only living doctor in the UK to have a disease named after him!

Professor Hughes trained at the London Hospital in Whitechapel and in New York, with Professor Charles Christian. He held a consultant post at Hammersmith Hospital where he set up the UK’s first Lupus clinic. Later at St. Thomas’ Hospital.

Since 2005, he has run the London Lupus Centre at London Bridge Hospital, together with a team of ten consultants.