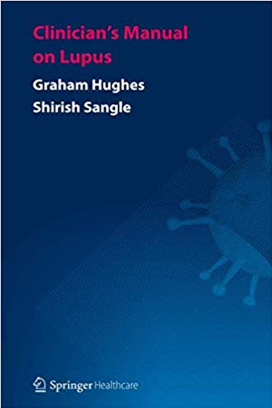 Good and bad!  November saw the publication of the 2ndedition of my book “Hughes Syndrome.  A patient’s Guide”.  Wonderful improvement, stories of two of my patients – one from the Scottish Isles, and one from Romania.

The first patient from the Scottish Isles presented with severe neurological problems.  Treated by Dr Hoda El-Mahrouki with heparin and then warfarin (INR 3.5-4) and now completely well.  The Romanian patient is this month’s patient of the month.

The bad news – at least for me, is the decision of the Hughes Syndrome Foundation to drop the name from the charity.

The epithet ‘Hughes Syndrome’ was an honour conferred on me by colleagues (experts) at the 4thInternational Congress on Antiphospholipid Antibodies” held in Louvain in 1989.

Miss A.J., aged 18, came to see me from Eastern Europe, Romania.  And she came by train as her mother, who accompanied her, was afraid of flying.

Miss A.J. had been diagnosed with lupus in the hospital in her home town.  She had complained of joint pains, a marked butterfly rash on the cheeks, and hair loss.

However, she had also suffered from 3-4 seizures and some odd psychiatric symptoms.  Her anti-DNA test was positive.

In view of her seizures and odd psychiatric features, she was diagnosed as neuropsychiatric lupus and was started on steroids.  High dose steroids (60mgs daily).  Unfortunately, she suffered further ‘brain’ episodes and the steroids were continued at a high dose.

When she arrived at my clinic, she had gross “Cushings” – bloated, red face, weak – and her problems seemed now to be more steroid-related than lupus related.  Then the test results came back – DNA antibody weakly positive, kidneys normal, but aPL tests for ‘sticky blood’ extremely high.  Brain MRI showed several small ‘dots’.  Perhaps APS was the major player rather than the lupus.  A planned programme of steroid reduction, coupled with warfarin anticoagulation was started.

Two years later she returned to England – again by train.  Completely transformed.  No more steroid effects – face and body back to normal.  And no more ‘cerebral’ features.

I have photographs in my clinic of the enormous improvement in her appearance, and in her life.

Last month, some 20 years later, she returned to London (on her own and by Air).  It was a social visit, but she took time to pay a visit to London Bridge Hospital.  Well-controlled on warfarin and very, very well.

The importance of the correct diagnosis.  And the joy of medicine!